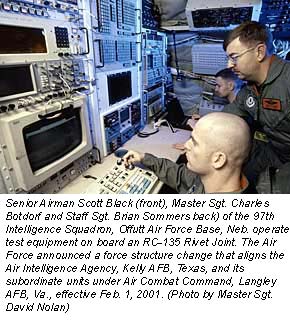 Effective February 1, 2001, AIA will change from an Air Force field-operating agency to an ACC primary subordinate unit. This realignment, recognizing the growing role of information operations as a warfighting weapon, has a primary objective of enhancing information operations in direct support of the Joint Force commander.

Under the new arrangement, the National Air Intelligence Center, Wright-Patterson Air Force Base, OH and the Air Force Information Warfare Center at Kelly AFB will continue to report to the AIA commander. Existing administrative support relationships between AIA and the Air Force Technical Applications Center will remain as well.

The announced realignment "doesn't require the relocation of any units and I expect any changes to manning levels to be minimal," said Maj. Gen. Bruce Wright, AIA commander.